Today we would like you to make number cards 1-5 or 1-10 or even 1-20 (make sure that your numbers are round the right way) Then place a cuddly toy on one of the numbers. Can your child tell you which number is hiding under the toy and explain how they know?  Have a look at the 3 pictures below of my toy goat and my numbers to give you an idea.
I have made number cards 1-10 and collected a cuddly toy. 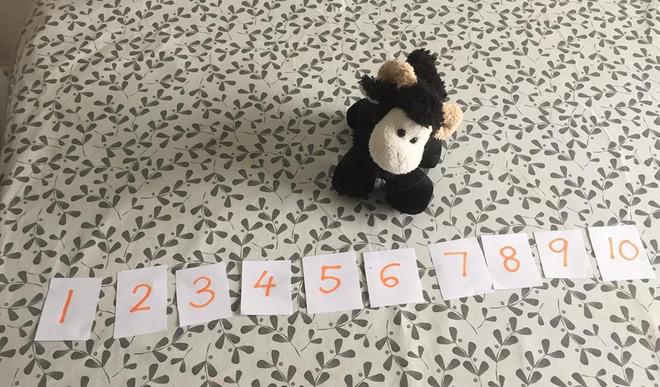 . I know the goat is on number 6 because number 6 comes after number 5

If you would like a challenge do the activity below...

Do the same game as above but ask your child to tell you 3 different ways how they know which number is hiding and then prove it. For example in the picture with the goat on number 6 your child could say any of the following things...

Being able to explain their answer in a variety of ways is a sign of a great mathematician and by proving it to you in their own way shows that they fully understand the concept at a deeper level. In class we are always asking the children to "prove it"